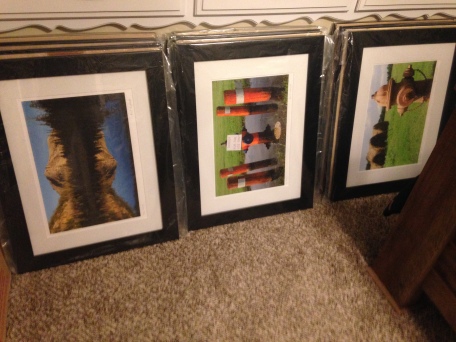 The second half of the month I finally got around to ordering art show display items (tent, lights, print display racks, etc.). The last week of the month, I got most of this delivered, and I got all my framed prints back as well. That was really exciting. It really made it feel like I was starting to make some good progress. I’m to the point now, though, where I have my art show stuff scattered all throughout the house. Haha.

And last, but not least, I was finally able to get out and get some new pictures in April, one of which is shown above. My family went on a camping trip to Sardis Lake mid-month. For the trip down there, I took the “scenic route” and stopped in a few towns along the way to try and get some fire hydrant pictures. I got a few decent pictures, and I was able to get a few more pictures of other things while at the campground. You can see the rest here. It’s always nice to get out with the camera after a while of not using it, and it makes it even better when you can get some good pictures as well.

Looking Forward To May

May is off to a rough start already. Haha. Yesterday after work I was planning on making a couple stops after work that were out of the way of my normal route home. While I was at my first stop, I realized that some severe thunderstorms were headed my way, so I skipped the second stop and headed home. The thunderstorms ended up fizzling out quickly just as they got to OKC, so I could have made the second stop after all. And then I did some digging into a metal print order I placed this past weekend, it looks like it didn’t go through. I was hoping to have the prints back by tomorrow so I could get my tent set up and take pictures with the prints, but it appears that won’t be happening now. Hopefully it’s not a sign of how the month is going to go.

The goals for this month are to get my tent set up and get some pictures so I can start applying to shows. I would like to have a “trial run” show mid-month for family and friends so I can try and work out a few kinks prior to a real show. And I’ll slowly be adding to my inventory in the meantime. It should hopefully be a slower month compared to the last couple, but there is still lots to do. I will be focused a lot more on getting ready for shows as opposed to the inventory side of things.

It should be an exciting month if I can get everything done that I would like. Hopefully I got most of the bad luck out of the way yesterday.